Denver Nuggets are no Fools Gold

Denver Nuggets are no Fools Gold 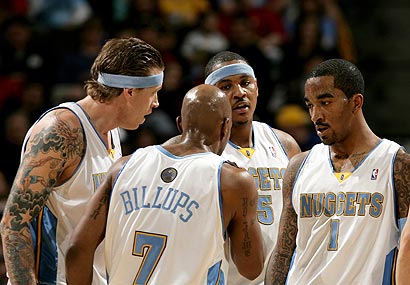 This year’s Western Conference final is sure to be a Wild West showdown. You have the ultimate match up of NBA scorers with Melo vs. Kobe, along with a good low-post match-up in Kenyon Martin and Nene vs. Paul Gasol and Andrew Bynum, and a point guard match-up with Chauncey Billups vs. Derek Fisher.

When the season started nobody would have picked the Denver Nuggets to qualify for the Western Conference finals.  The fact the team made quick work of the Dallas Mavericks and has had five days off waiting for the Lakers to finally show up and eliminate the Houston Rockets is nothing short of remarkable.

Now Denver faces by far their most difficult challenge of the season when they face off in game one of the Western Conference finals on Tuesday in Los Angeles against Kobe and Co.

The Nuggets come into the series with the highest point differential of any team in the league having lost only two games in the postseason thus far.  The Lakers, on the other hand, have been Webster’s definition of inconsistent. But when truly tested the Lakers have answered the call.

The question is whether or not the Lakers' casual attitude in certain games will eventually come back to eliminate them from a championship run.

The key for Denver in this series will be defense. They cannot allow the Lakers to go off for 130+ points a game or it’s lights out.

Kobe is the go-to guy, and Denver will need to limit his touches and hold him to under 24 points a game for the series. The Nuggets can do this by putting Jones or Smith on him. They will also need to stop Gasol from out-rebounding their big guys, force Bynum to take low-percentage shots, just let Fisher be Fisher, and try and contain Ariza and Odom. Simple right?

It’s no doubt that the Lakers have an arsenal of great weapons that could abuse the Denver defense, but Denver plays much harder and is a more physical team than L.A. Kobe is a cry baby, and Smith and will need to get in his head by roughing him up a little.

The key for the Lakers is simple. Provide help for Kobe and try and feed the post as much as possible, exploiting the fact that Denver tends to give up more points than most teams. They will need to wear down the Nuggets starting five forcing Denver to go to their bench much earlier than they would like. The L.A. bench is deep and could be a key component in the outcome of the series.

This will be the series that everyone will be watching this postseason as a scrappy little team from Denver squares off against the NBA establishment, Lakers.

Denver is hotter than any team left in the semi-finals, with maybe the exception of King James and the Cavaliers.

George Karl has them playing at the top of their game and the Nuggets will need to play hard, rough, and physical in this series if they don’t want to repeat last years playoff elimination by the Lakers and prove once and for all they are for real.